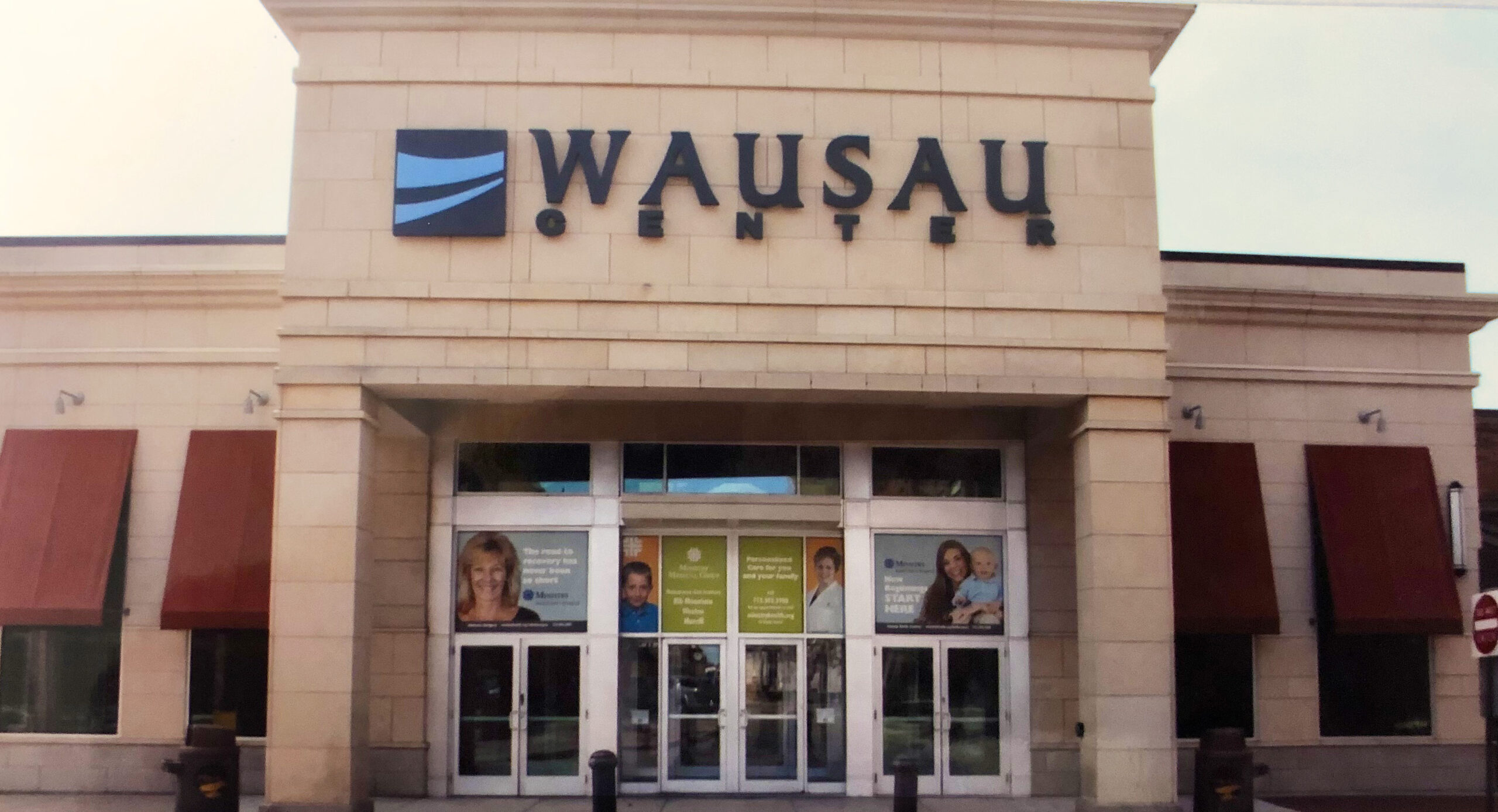 This is the first in a series of Mall Memories as shared by community members.

Ryan Gallagher had to have one last look. The place where he spent countless hours in his youth was about to become a memory.

When it opened in summer 1983, the Wausau Center Mall was the epicenter of excitement for Gallagher and other kids growing up in the ‘80s and ‘90s in central Wisconsin. It was where they met Santa and the Easter Bunny and got their first haircuts at Regis. They bought drinks at Orange Julius, ate chips and salsa at Diamond Dave’s, played video games at

Aladdin’s Castle and picked up the latest soundtracks at Camelot Music. The mall was a formative place for kids growing up in that era, and Gallagher jumped at the opportunity to walk those corridors for the last time.

Weeks before the doors closed forever, Gallagher took a nostalgic tour of the vacant mall, guided by Dave Eckmann, president of Wausau Opportunity Zone, Inc., the owners and redevelopers of the mall property.

“On one hand we were walking through a sad and apocalyptic scene, and on the other hand it was magical to retrace a lot of happy footsteps,” Gallagher said.

Dusty floors and dark, hollow shops now filled the space that had brought life to downtown Wausau for almost 40 years.

“There was always something going on here,” he said. “I remember Jail and Bail in the center of the mall with WIFC’s Jammin’ Jimmy Clark and Duff Damos and Bill Mitchell.”

Around every corner there was a memory. “One that I still laugh about today was when my babysitter brought me here and wanted to see her friends at Prange’s, but I insisted on going to K-B Toys, so I sat down in protest right outside the store.”

Gallagher, who grew up in Wausau, regularly visited the mall, since his mom worked at The Limited. “She was one of their legendary top sales reps,” he said.

Amy Sabel was another mall employee who sold women’s fashions back in the heyday. She was a manager for Braun’s, Id Boutique and Casual Corner.

“I loved the mall,” she said. “My first purchase when it opened were suede pixie boots from Baker’s, and we all saved our money to buy a leather bomber jacket. Ah, the smell of leather jackets at Wilson’s.”

The mall put big-city style within reach for those who previously traveled to distant markets for shopping sprees, while others unfamiliar with enclosed shopping malls were introduced to a new world of possibilities.

“Prange’s cosmetic counter was the first time we had access to good makeup like Clinique and Estee Lauder,” Sabel said.

It didn’t take long for the Wausau Center Mall to secure a place in the hearts and minds of its patrons. A deep connection formed with customers as it became the go-to destination for everything from toothpaste at Walgreens to engagement rings for life’s big moments.

“There was so much anticipation in going downtown,” Sabel said. “We all went there to get outfits for school dances and dyed satin pumps for every wedding we stood up in.”

Ronald Brinza, the first Wausau Center manager from 1983 to 1986, saw the community embrace the mall during the early years.

“They really thought it was their mall, and they took to it with a good deal of enthusiasm,” he said.

Brinza, who lives in Sun Prairie now, was in charge of planning the Wausau Center opening on Aug. 3, 1983. The weeklong celebration was at a scale this region had never seen before.

“We hired an agency out of Milwaukee to coordinate the parade. It was one of the best events we ever had in terms of fanfare,” he said. “There was music and dancing, and when the mall doors opened and the balloons fell it was really something special.”

Thousands crowded the pedestrian mall to be a part of the merriment. Local celebrities like Howard and Rosemary Gernette gave speeches, and then Mayor John Kannenberg was on Good Morning America.

re was so much excitement. I was supposed to have a TV interview, and the crowd was so thick that I couldn’t get through to the reporter,” Brinza said.

As shoppers flocked to the new mall, they found that it lived up to the slogan: Where you’ll find shopping is fun again. “And it sure was. There was always something going on,” Brinza said.

He attracted shoppers to the stores by piquing their interest with petting zoos, bridal shows, cheerleading competitions and a center court display of a glider plane with a 30-foot wingspan.

The mall was brimming with possibilities

With its all-encompassing nature, the mall became more than a collection of stores under one roof. It was a venue for events and social gatherings where school choirs sang Christmas carols, mall walkers exercised, and soap opera stars and professional athletes held meet-and-greets with fans. It was even the dream location of a wedding.

“In my first year at Wausau Center Mall, the Green Bay Packers made it to the Superbowl following the 1996 regular season,” he said. “We received a call from a couple planning their wedding in January, and they wanted a unique setting. We worked with them and had a wedding celebration at the center court on Superbowl Sunday. The wedding party was decked out in Packer gear.”

Craig worked for the original mall owners, The Jacobs Group of Cleveland, Ohio, from 1996 to 2000.

“Those were truly the peak years. We had over 63 specialty stores and three anchor stores, along with numerous seasonal kiosks throughout the center area,” he said. “We hosted at least one community event every month and one mall-wide sales event with 100% participation from every store. That was a record throughout the 40 Jacobs Group malls nationwide.”

The Wausau Center grew into one of the most successful regional shopping centers located in a city’s downtown. As the 2000s progressed, the years would include renovations to the mall’s center court, the main entrance on 5th Street and the food court.

Unfortunately, it also included a decline in foot traffic. The glory days inevitably fizzled out, and storefronts emptied — as they did in many shopping centers across the nation.

“The mall was an iconic structure in the history of our community and a place filled with memories for thousands of patrons and employees,” Craig said. “We’ve slowly watched the center decline throughout the last decade.”

Like paying tribute to the loss of a loyal friend, community members turned to social media to bid the mall farewell and reminisce about their favorite times.

Dave Kallaway of 95.5 WIFC said, “We used to broadcast our whole show at Wausau Center Mall on Black Friday. So much fun to see moms racing to K-B Toys and proclaiming before 7 a.m. that they were all done with their Christmas shopping.”

Spencer’s has since relocated to Rib Mountain Drive, along with Buckle and Maurice’s.

Over the last decade, consumer shopping habits shifted away from malls to online shopping. The trend caused some Wausau Center stores to relocate or close, including three anchor stores — JCPenney closed in 2014, Sears closed in 2016 and Younkers closed in 2018.

In 2019, a breath of fresh air entered the vacant Younkers location when HOM Furniture opened with 206,000 square feet of retail space.

City leaders want to fulfill a vision of Downtown Wausau that will revitalize dwindling areas to be in harmony with thriving districts around the mall. Wausau Opportunity Zone, LLC and the City of Wausau partnered to purchase the mall for around $3 million and successfully bring it into the 21st century.

“This area will be transformed into a more vibrant site for living, shopping, entertaining and more,” said Craig. “We’re moving toward a more sustainable central business district with one of the most beautiful downtowns in all of Wisconsin.”

Area business leaders agree that Wausau Center has enriched the region for many years, and now it’s time to grow in a new direction within those eight city blocks of downtown.

“If we’re not growing, we’re dying,” said Gallagher, who is president of Rocket Industrial located in the Third Street Lifestyle Center.

While earning a college degree and starting a career, Gallagher moved to other parts of the United States, including Nashville and New York. He was quickly drawn back home to Wausau where life was good and familiar.

Today, it’s one of his goals to draw others here to enjoy the benefits of this centrally located city that offers ample manufacturing jobs, great neighborhoods with low crime, short commutes and a plethora of outdoor sporting activities.

“There’s a great energy downtown, but people don’t want to move next to a 1983 shell of a mall. They want to move to what’s coming,” said Gallagher.